Montessori Practical Life at its best: Egg Peeling and Dish Washing. Check out these images from this past week. The great part about these activities is that they are good for our little spirits’ development AND can actually be helpful to us around our home or classroom.

I grabbed a few hard boiled eggs from the fridge the other day. My three year old eyed the eggs, grabbed his stool and said, “I am going to help you, Mama.” Man, I was hungry. I need to move fast to combat my state of “hangriness” but I took the opportunity. What else was a mom to do?

So he climbed on up to his stool, which he had very conveniently placed at the sink. I took one egg and handed him the other egg. He watched me. I told him to “whack” (technical term) against the sink. He gently nudged it. I said, “harder!” That activity by itself was a load of fun for him.

So he cracked the egg, eventually, and together we peeled our eggs. I showed him how you can get your finger under the shell and peel off a big section. He showed me how you can slowly pick, pick, pick little pieces of the shell from the egg. Both methods worked and both methods were satisfying.

Related Read:  Where to Start with Montessori

If I had “planned” this activity, I would have involved my son earlier in the process. I would have explained what it means to “hard boil” an egg, presented on a tray with a dull knife and a bowl, then demonstrated the “how to”.

Then, our sweet boy decided that he needed to help me “clean up, mama”. So he dove into washing dishes. Honestly, for the first time, I felt the effort of including my son into the “activity” was less than the reward of him actually helping pick up. Fabulous. 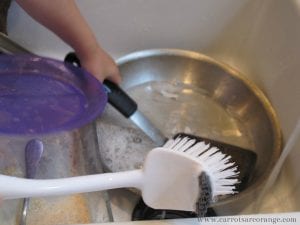 He was a natural with the pan brush. 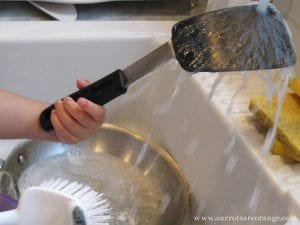 He was thrilled to rinse the utensils under the water and squeeze the dish soap. 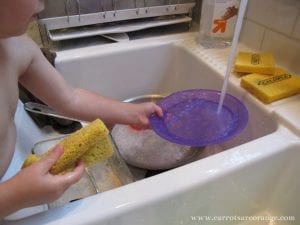 Thanks for choosing to read this post. I hope that we have inspired you.