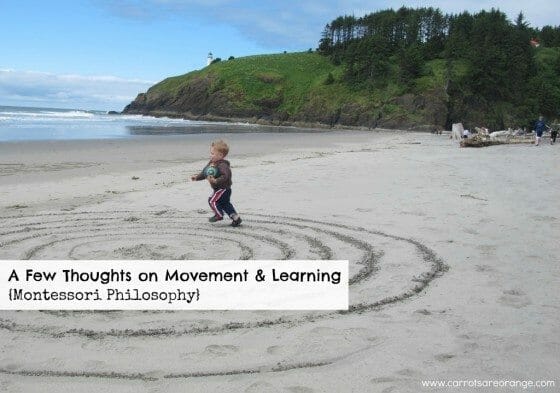 Montessori believed that mental and motor activity should act in unity, that a children must be given the chance to act as a whole. Movement with thought is a “synthetic movement” or a “knowing activity”, directed by the intelligence to a reasonable end.

Practical life (and within practical life, grace & courtesy) lessons are examples of such movement. So, each lesson (each movement) has a well-defined and understood purpose which can be transferred easily to a real life situation.

Movement with thought meant breaking up of movements into their components and by focusing on the means of the movement rather than the end. Movement followed by thought or preceded by thoughts could not achieve the same intellectual result.

E.M. Standing writes, “the value of movement goes deeper than just helping in the acquisition of knowledge.” Montessori believed that traditional approaches to giving students an opportunity to take a break from “mental activity” with movements of gymnastics, for example was a disservice to children. She thought that substituting movement without thought, for thought without movement leads to fatigue, that when mental and motor activity act separately (when they should be united) every effort is resented whether mental or motor.

Thank you for reading!
Marnie