Preschoolers are ripe for learning math concepts. They may not know it but their brain sure do. For example, within Montessori introducing preschoolers to geometry via the geometric solids (visual) and the geometric cabinet (visual and fine motor) as a start prepares them for more complex math concepts down the line. Fascinating, right? 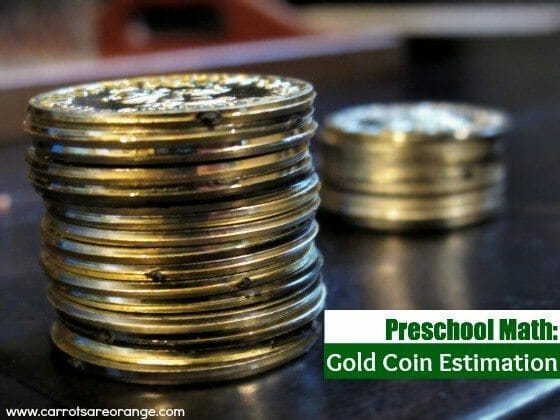 Here is a simple math exercise for your to introduce into your home or classroom. To introduce this activity I invited my son and using a single mason jar with a random amount of gold coins in it, I asked him: ‘How many coins are in this jar?’

We then counted the coins together to find there were only 11 coins in the jar: “There are less coins in this jar than 50. 11 is less than 11.” 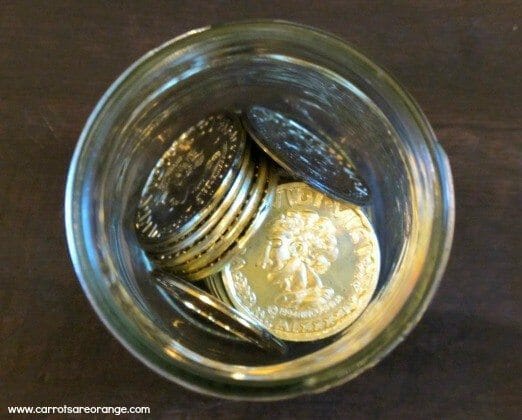 So we did the exercise again. His reply this time was way off in the opposite direction: ‘3!’

We then counted the coins together to find there were 22 coins in the jar: “There are more coins in this jar than 3. 22 is more than 3.”

The third time he was much closer. The learning curve was steep. At that point he wanted me to take a turn. I went with it. I thought it was a good opportunity to let him k ow that us adults do t always have the answers. Sometimes we’re wrong (gasp!).

{Comparison} The next part of the lesson I brought out a second jar. In one jar I placed two coins. In the other jar I placed 20 coins. Without using many words, I pointed to the jar with ‘less’ and said: ‘This jar has less coins than this jar.’ Then I pointed to the other jar and said: ‘this jar has more coins than this jar.’ Then we counted the coins to verify the amount. 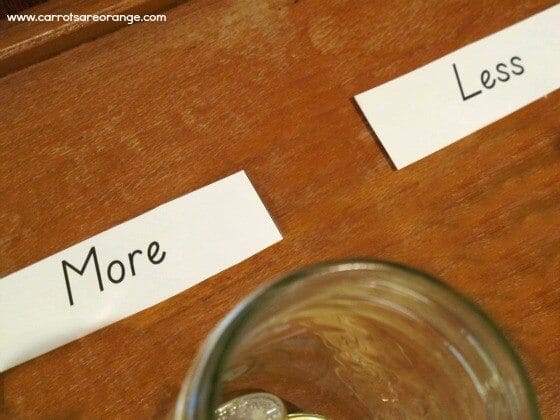 {Language Cards} Then I introduced simple language cards: ‘more’ and ‘less’ to further emphasize the “more than” and “less than” language I used in the introduction.

{On the Shelf} I placed the two jars on a tray with the gold coins in a separate bowl. I placed the language cards in a small basket on the tray. Then I placed the tray on a shelf in their learning space. My sons know they can work with the material as they desire.

As a side note, right on par with his developmental stage, my two year old took the coins, plopped them in one of the jars and then poured them into the other jar. Not exactly what the work was meant to be used for (if you are 3-6 years old) but perfectly used for a younger child. Kids are amazing.

Thanks for visiting!
Marnie