I know, shocker, my two-year-old is obsessed with dinosaurs. I am going with it. The greatest thing about this obsession he shares with so many other young children is that the plethora of resources on activities that exist in cyberspace is fantastic.

I mean, like, Wow. So, I’ve been inspired by my son and by the total amount of creative dinosaur activities in existence. I hope to inspire some of you with my own flavor.

I created a BUTTERFLY UNIT recently and had a blast. Perhaps the best part about writing up these lessons so far is that the “lesson” is genuinely organic. For example, we play with dinosaurs every day, but today was different.

So this organic learning is by far my biggest motivation to put some structure around his genuine interest, an interest that I don’t think will go away any day/month/year soon.

So thanks for reading.

I am so, so excited about this activity. 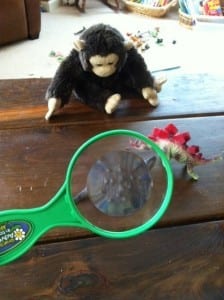 . We’ll use feathers, rocks, rice, etc to compare and contrast the eggs. Plus, we’ll do some basic listening exercises by filling the eggs with different items.

Then we will be tracing and learning the sound of the letter d for dinosaurs using the book Montessori: Letter Work, our Sandpaper Letters

I bought a great Dinosaur Felt Board story set on Etsy. We have a great time making up stories with this set.

We’ll be using puzzles to complete the pre-sensorial work.

is about dinosaurs. So, the cd makes for a perfect addition to our dinosaur unit.

We listen to the great Wee Sing Dinosaurs

CD. Very catchy tunes and perfect background music during ‘choice time’ in the mornings. I checked this CD out of our local library, but the online price is very reasonable.

In addition to Wee Sing, I found these creative dinosaur-themed songs online.

To begin, we sang these wonderful counting songs (see below). I found the dinosaur counting lyrics posted almost 14 years ago. Amazing! Then, we’ll use Melissa & Doug’s Dinosaur Stamp Set

to work on one-to-one number matching and recognition.

Also, use real objects such as Safari’s Dinos TOOB

to work on “which pile has more or less” and “please hand me two dines,” etc.

After singing, we’ll work on matching and sorting with Safari’s Dinos TOOB

. We’ll match to images and to objects, and sort based on size, what they ate (meat or plants), and where they lived (on land or in the water).

There is also a lovely matching game if you have the resources to buy it.

Three activities to work on fine motor: 1) using tongs to pick up and drop into a bucket small dinosaur figurines, 2) unearthing fossils with toothbrushes, etc., and 3) working together on these fantastic Dinosaur morphs.

We are so fortunate in Seattle to have to Woodland Park Zoo and Pacific Science Center. These institutions have lovely online resources too.

I found this super cute dinosaur movement activity! The children act out a dinosaur’s movements. So fun!

Dinosaurs of Long Ago
The dinosaurs lived long ago,
and walked like this, and that. (Slow, heavy walk movement.)
Some were large (Stretch hands upwards.)
and some were small. (Crouch down.)
Some liked water (Swimming motions.)
and some just walked on land. (Stomp feet.)
Some had wings, that flapped and flapped. (Flap arms.)
Some had long necks, that stretched and stretched. (Hand on neck stretching upward.)
The meanest, rudest one of all was ferocious Tyrannosaurus Rex. (Feet apart, hands claw like, scowl and growl.)
These were the dinosaurs of long ago.
Goodness gracious, where did they go?

That is a good start and is sure to keep us busy!

Thanks for reading, and have fun!
Marnie