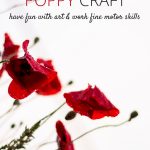 Even with young kids, taking a moment to stop and celebrate days such as Martin Luther King Jr. day and Memorial Day is important. There are simple ways to celebrate these occurrences with kids.

For example, poppy crafts & activities are a perfect hands-on way to start a conversation with kids. This post shares a fun & easy Red Poppy Craft for Memorial Day.

We cherish too, the Poppy red
That grows on fields where valor led,
It seems to signal to the skies
That blood of heroes never dies.

The poppy is a symbol of Remembrance Day. The poem above was written in 1918 by a woman, a historian & a professor, named Moina Michael.

She later became known as the “Poppy Lady” as this beautiful flower came to be known as a symbol of Memorial Day to honor those men and women who died serving the country.

Click here for the full poem “We Shall Keep the Faith“.

Other Memorial Day facts for children:

“Taps” is often heard at Memorial Day celebrations. It is a musical piece sounded at dusk, and at funerals, particularly by the U.S. military. It is sounded during flag ceremonies and funerals, generally on bugle or trumpet, and often at Boy Scout, Girl Scout, and Girl Guide meetings and camps. (Source: Wikipedia)

{Click on the image to hear the bugle playing Taps}

Holidays give the opportunity to introduce language to children. Below are a few key vocabulary words that may be of interest to you for your home and your classroom.  I also created Memorial Day language cards for your FREE use.

What Does the Red Poppy Symbolize?

The poppy appeal came in the early 1900s. Commonly found on the Western Front (the main arena of war during the first world war), a doctor named John McCrae found inspiration in the flower that flourished even as the fighting tore up the landscape.

As a result, he wrote a poem titled “In Flanders’ Fields”, an area where he fought in the Battle of Ypres during the war.

In response to this poem, American humanitarian, Moina Michael, in November of 1918 wrote We Shall Keep the Faith (referenced above).

Soon the poppy is the symbol of remembrance of the 1st World War after Moina Michael campaigned to make the poppy the symbol of those soldiers who died in the war. Today, many people in the United States and the United Kingdom wear a red poppy on Armistice Day and Remembrance Day.

This Memorial Day poppy activity is great for at home or in the classroom.

I invited the children to pin poke the center (the pistol and the stamen) of the poppy flower outline. Pin poking is a great fine motor exercise.

I hope we inspired you today!
Marnie

This is so wonderful! Thank you, from an Army family.