Children’s books about math can be fun and inviting to children, introducing math ideas in a playful, imaginative way.

What Montessori Says about Math

Montessori emphasized that the child is naturally drawn to precision, to organize, to compare, to create order out of disorder, to classify and quantify patterns and relationships. We are born with a drive to calculate and to reason within our environments. With guidance, the capacity to think in this way flourishes and develops over the years.

So, exposing a child to math ideas is helpful to the development of more complex math concepts. Without this exposure, a child’s brain won’t be as ripe for more advanced critical thinking. 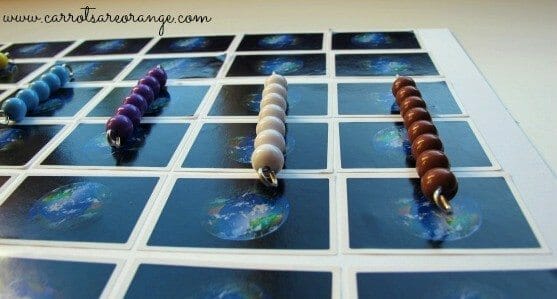 “The focus is not on the answer – it’s on how your child gets the answer. This is contrary to the usual way we operate in the adult world, where results are the primary goal to be reached.” ~ Michael Duffy, Math Works

Montessori believed that early math prepares a child for logical and critical thinking, not for memorizing math facts.  Math in a young child’s life deals with shapes, patterns, and spatial relationships he experiences within his environment. Current brain research tells us that learning patterns begins in utero with light and dark, day and night, tones and patterns of voices of people, music, and objects in the environment, and being still and being active. Children are drawn to order. Thus, routines are critical for a child’s development. Routines give children an entrée into logical thinking.

3 things I have learned in my Montessori math training

I am excited to share many ideas I have learned throughout the week. First, I learned how many wonderful math-related books exist within children’s literature. These books aren’t just about counting but, even better, these books are about problem-solving.

The Grapes Of Math

How Big Is a Foot?

What are your favorite children’s books about math?
Marnie