The Montessori theory in my view must be applied to all areas of life far extending the boundaries of the classroom. These inspirational quotes for parents highlight that belief.

Montessori is a way of life that must not end and begin at the classroom door. Montessori’s philosophy extends out into the world and into the home. Subsequently, Montessori parents are an integral part of that extension and must pay close attention to their child’s development. This is part of parents love for their children. 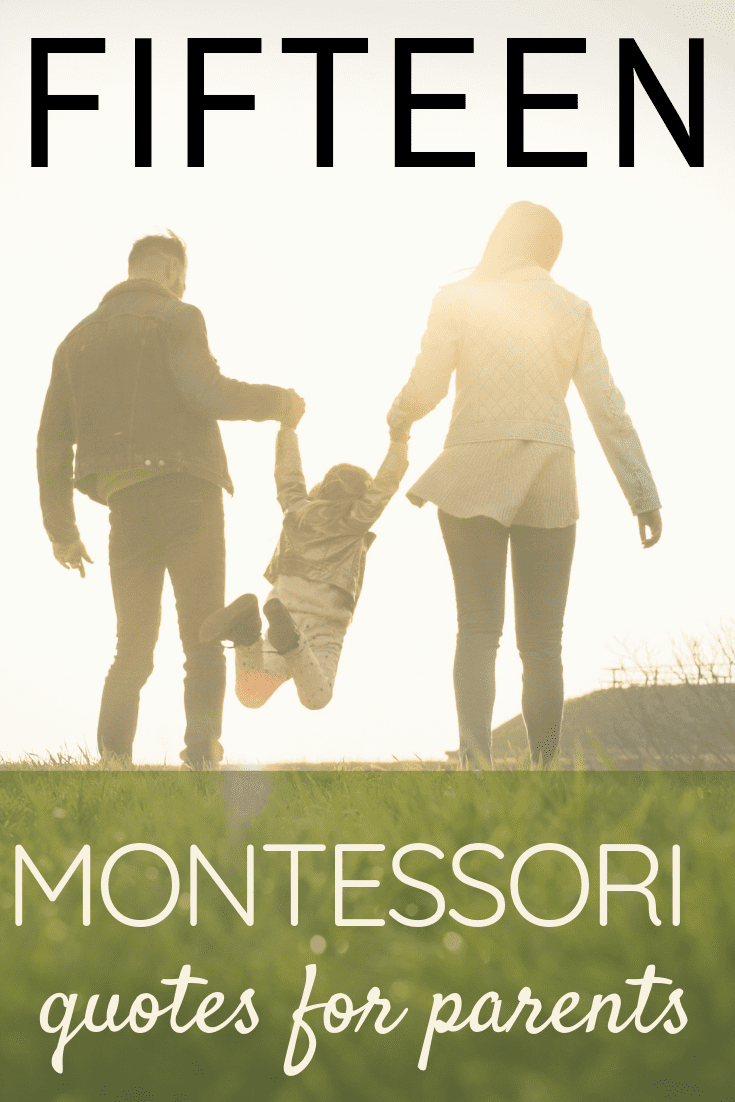 “The greatness of human personality begins at the hour of birth.”

This is the moment a child begins to experience the world and all its sensory glory. Children are our biggest blessings in the world but we must remember that a child is his own spirit and person.

“Children must grow not only in the body but in the spirit, and the mother longs to follow the mysterious spiritual journey of the beloved one who to-morrow will be the intelligent, divine creation, man.”

There is a delicate balance between guiding and observing a child as he leads his own development. Yes, we are role models but we must allow the child to explore and discover on his own.

“The essence of independence is to be able to do something for one’s self.”

Parents offer unconditional love and this love should be within the context of helping a child developing independence.

“Respect all the reasonable forms of activity in which the child engages and try to understand them.”

There is always some sort of intention behind a behavior – whether good or bad – that isn’t visible at the surface.

“To give a child liberty is not to abandon him to himself.”

“To let the child do as he likes, when he has not yet developed any powers of control, is to betray the idea of freedom.”

Both of these quotes lend to the idea of freedom within a disciplined environment. In other words, we do a disservice to the child if we don’t offer boundaries. The idea is to create a well planned, well-prepared environment and give the child immense liberty within that environment.

“To assist a child, we must provide him with an environment which will enable him to develop freely.”

Observe the child. Do not intervene. This approach requires a lot of patience and discipline but it is absolutely necessary. From those observations, curate and prepare an environment best suited for his developmental stage and interests.

“Imitation is the first instinct of the awakening mind.”

Montessori often gets criticized for being too structured and too serious. Here is the thing, though, children find great joy in work an often this work comes in the form of imitation and that is a good sign.

“Discipline in freedom seemed to solve a problem which had hitherto seemed insoluble. The answer lay in obtaining discipline by giving freedom. These children, who sought their work in freedom, each absorbed in a different kind of task, yet all belonging to the same group gave an impression of perfect discipline.”

“The child who concentrates is immensely happy.”

We often mistake this concentration for seriousness or a lack of joy. In reality, the experience is precisely the opposite for the child.

“The human being is a united whole, but this unity has to be built up and formed by active experiences in the real world, to which it is led by the laws of nature.”

Children need to be given the freedom to have experiences, to fail, and to explore on their own and within their own terms.

“We used to say that it was the mother who formed the child; for it is she who teaches him to walk, talk, and so on. But none of this is really done by the mother. It is the achievement of the child. What the mother brings forth is the baby, but it is the baby who produces the man.”

“To recognize this great work of the child does not mean to diminish the parents’ authority. Once they can persuade themselves not to be themselves the builders, but merely to act as collaborators in the building process, they become much better able to carry out their real duties; and then, in the light of a wider vision, their help becomes truly valuable.”

“To understand the baby’s mind, it is absolutely essential to take the path of observation and discovery.”

“..it is well to cultivate a friendly feeling towards error, to treat it as a companion inseparable from our lives, as something having a purpose, which it truly has.”

Most of these quotes came from The Absorbent Mind, a critical book written by Dr. Maria Montessori. I have written about the concept of the absorbent mind. I encourage you to learn more about Montessori’s absorbent mind!